I thought I'd start off the year with a recently published article which I shot late last year. The story was on the youtube Shangaani Electro sensation, 'The Tshe Tsha Boys,' from Giyani, Limpopo, South Africa.

Earlier last year while researching stories for the Colors Magazine 'Dance' issue on my residency at Fabrica I came across an absolutely manic video of a bunch of guys called the 'Tshe Tsha Boys' and a South African producer called 'Nozinja' who pioneered the now keyed, 'Shangaani Electro Scene.'

When I came through to South Africa to shoot the story as well as another which was published in the 'Dance' issue (Real Action Pantsula in Orange Farm) things didn't work out due to unforeseen circumstances, I returned disappointed to Italy empty handed with regards to the Tshe Tsha Boys shoot determined to approach it when the opportunity came up again.

A few months later I received an email from the editor of Electronic Beats magazine Viktoria Pelles about her them ironically researching stories for a dance themed issue. I immediately suggested the Tshe Tsha Boys who I know had a contact with and really wanted to shoot. She accepted the story and I jetted offto South Africa once again to do the shoot. Finally I had my opportunity and I was determined to get it right this time.

On the day of the shoot, I had a subtotal of four hours to get my shots as the guys had to return to their hometown of Giyani on a bus that afternoon and couldn't be late. We chose to do the shoot behind and in Nozinja's garden in Soweto.

They where energetic and soulful when approaching their dance, as if they knew nothing else and expressed their lives through this form of movement. I asked them what the costumes meant as they had made quiet a stir on youtube, they answered, 'Children love the costumes.' In Giyani and other small towns dancers like the Tshe Tsha boys are hired as entertainment and dance to crowds of sometimes thousand of people. The beauty of grass roots South African culture is its appreciation for live dance and entertainment. People in the mostly Shangaani area of Limpopo appreciate music in their language which embraces their own music and traditional dancing but now in a modern format (thanks to Nozinja). The community keep the scene alive by supporting local gigs and buying DVD's and Albums which are sold at the live performances. This allowing the scene to flurish and now with international interest possibly explode.

It was a pleasure getting to meet Nozinja and experiencing a non-exploited culture true to its roots.

To a successful and Enlightening 2011.
Chris Saunders 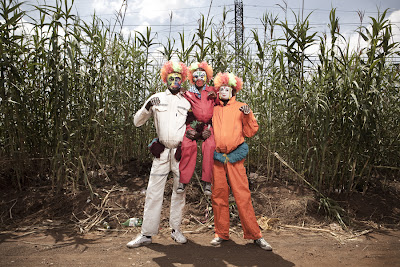 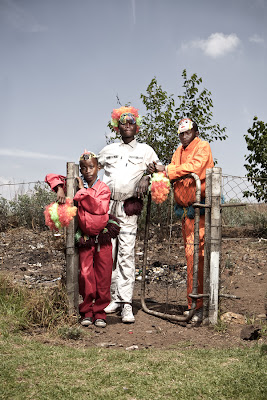