Dazed Digital, Lagos and the Mama's

Last week I headed up to Lagos Nigeria with the editor of Dazed & Confused magazine Rod Stanley to cover a story on the MTV mama awards. The first little bit of the story is up on Dazed Digital.

I have pasted the text by Rod Stanley and the pics with it below. If you wanna see it on the dazed website please visit DazedDigital.

There is more to come with the print issue in a couple of months where we will release the full story with all its images.


A LAGOS PARTY: DAZED AT THE MAMAS


There ain’t no party like a Lagos party, or so they say. This weekend, Dazed flew out to Lagos, Nigeria for the third annual MTV Africa Music Awards and spent a few days and some late nights meeting rap, R&B and kuduro superstars from across Africa: names like Banky W, Fally Ipupa, Daddy Owen, Cabo Snoop and Radio & Weasel, from Angola to Uganda, Democratic Republic of Congo and beyond, all huge stars in their own countries, selling truckloads of records despite rampant piracy and a rickety music industry. These guys are kind of the Jay Zs and Snoops of Africa, basically.

In our brief time in Lagos, we managed to get chased off the red carpet after walking out behind some stars as they posed for the TV cameras, incoherently advise the boss of MTV Worldwide on his business strategy (a man who had just arrived in a blacked-out 4x4 with two AK47-toting police guards), accidentally start a game of musical chairs with Public Enemy's Chuck D, and find ourselves abandoned by our hosts in a packed Lagos nightclub at 3.30am with only a bottle of tequila and our new friends the Angolan kuduro kings Cabo Snoop for company.

Our hotel seemed to have been lifted from the pages of a JG Ballard novel, featuring an impressive split-level outdoor pool with multiple water slides that absolutely no one was using, surrounded by razor wire and rusty freighters rumbling past in the rubbish-strewn lagoon. Inside, escorts touted for business in the main bar – one thoughtfully pressed her boobs up against the terrace window for us to admire as we choked on our burgers. To change money, you had to take your dollars down to the main gate, where a gang of ‘bookies’ would come over to your car and conduct business through your window. Beyond the gate lay a hooting, seething bedlam of motorised madness: weaving and honking cars, trucks and motorbikes rattling over potholes, while the street vendors selling everything from cold drinks to electric shavers risked life and limb twirling from window to window amid the roar.

Our time in Nigeria also coincided with Wikileaks revealing Shell’s insider dealings with the unimaginably corrupt Nigerian government. No one we spoke to, from street vendor to television presenter, seemed to be very shocked, sadly resigned to high-level corruption as a way of life in a country that is oil-rich but unforgivably spends next to nothing on its people. As Afrobeat legend and political revolutionary Fela Kuti's daughter Yeni said when we visited her at The Shrine nightclub she established in his honour, "If Fela was alive today, he would not be surprised."

When we sat down with visiting hip hop preacher Chuck D, he was similarly condemning and offered a slightly baffling analogy: “Wikileaks is the extension of the the digital monster not ever going back into the bottle. Governments now are falling to the leveling of the playing field. Africa is like a refrigerator. The world’s just been taking what it wants out of it for a long time, and now it is time to refill it with some soda.” Despite being a soda-less refrigerator, the good people of Lagos did not kidnap us or blow us up as we had been warned they would, and instead were funny, friendly and generous with their booze, even on the utterly terrifying Air Arik flight we took back to the UK: a 16-hour ordeal that involved a giant Airbus A340 being re-routed around Nigeria like a domestic shuttle, dumping 40 tonnes of jetfuel in the air so it could land, while a plane riot almost kicked off as they left us to bake without air-con in the African sun for two hours as it refuelled. Certainly it’s the only flight we’ve been on where a passenger committee was formed and read out its demands over the intercom. Arik? Air-Wreck, more like.

The awards themselves were entertaining in that stop-start way that performances for television are, aided by our drinking of pints of Hennessy in the local manner – the guest performances from Chuck D, Rick Ross and T-Pain were energetic and genuine, while host Eve threw herself into it with gusto. The finale with them all on stage together with the various African performers was oddly moving, while the final image of one of our boys Cabo Snoop leaving the stage with Rick Ross’s meaty paws draped over his shoulders is one to cherish. Many of the people we had met and interviewed over the two days picked up awards, including both Banky W and Sasha from Nigeria, Congo’s Fali Apupa ("These are men's leggings! Men's!"), Kenya’s Daddy Owen and Cabo Snoop from Angola, so we celebrated our surprising acuity and foresight at the ridiculously brilliant after-party by dancing and drinking more pints of Hennessy all night in a razor-wire surrounded club with all of the above and the beautiful people of Lagos getting wild by the poolside. Keep an eye on Dazed mag and Dazed TV in the coming weeks for interviews, photos and films.


All Photo's by Chris Saunders

Goodbye Fabrica, Blessed be your soul. 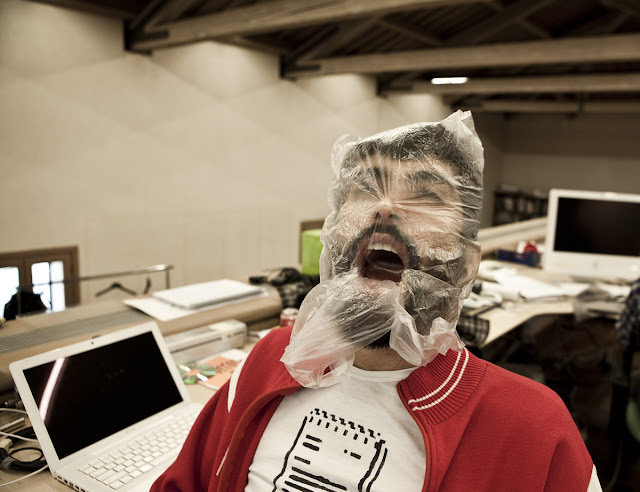 So after an exciting year of politics, amazing shoots, traveling and damn right good fun, Im heading home. Back to the green pastures of Johannesburg (Oooh wait that sounds silly, ahhh who cares). Fun times have been had and some of the best friends ever made.

On that note, I thought I'd stick up a image which epitomizes as much emotion as possible. Thanks Paulo for your inspiration in this one.

About a month ago, myself and my flat mate at Fabrica headed to Amsterdam. I was there to see my friend Murray Turpin & Catarina Dahms, as well DOP a music video with Murray (who directed and wrote the script), for Catarina's band Skip and Die. Didn't shoot too many pics while there but here are two memories I'd like to remember.
CT 2010
Posted by Chris Saunders at 13:03 No comments:

The Mama's in Lagos, Nigeria

I recently had the pleasure of attending the MTV Africa Music awards (The Mama Awards) in Lagos In Nigeria. I went up to do a story for Dazed&amp&Confused magazine and was accompanied by the editor of the magazine Rod Stanley.
Adjusting our internal clocks onto African time we hit the streets doing features on the over 8 African musicians from around the continent who where nominated for the awards, Yeni Kuti (Fela's daughter) who we shot at the Shrine which is based on the original one built by Fela in the 80's and another on the organiser of the event and MTV Africa director and creator, Alex Okosi.
It was a crazy experience with most of the dust still settling in side my head.
I thought I would post 3 pics from the trip.
Ct 2010.
Posted by Chris Saunders at 19:17 1 comment: