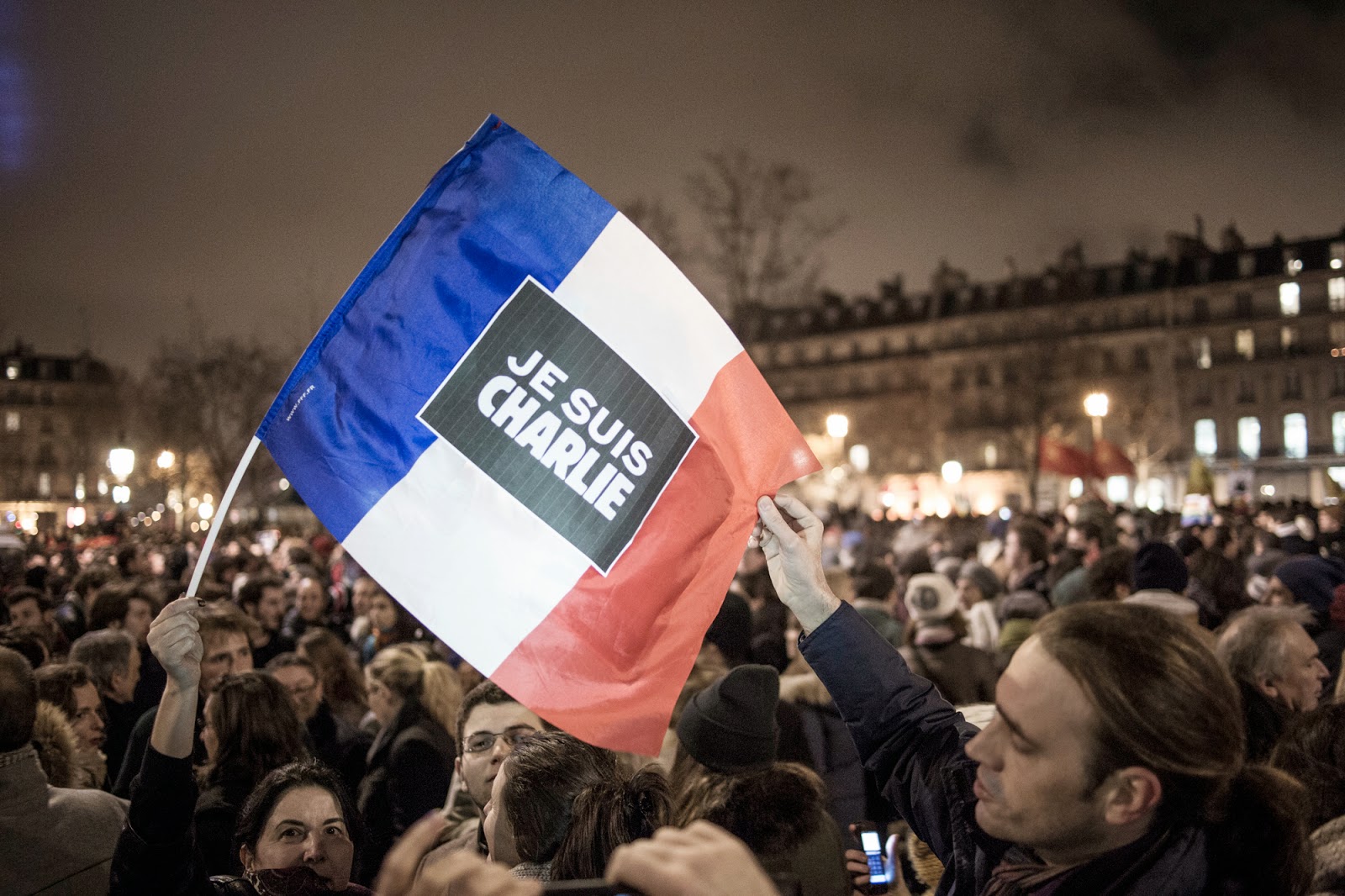 On the evening of the 7th January 2015, a few hours after the terrorist attack against the newspaper Charlie Hebdo that resulted in the death of 12 people including some of the most renowned French writers and cartoonists, thousands of citizens decided to gather at Place de la Republique, in Paris.
People came here to defend the Res-Publica, the “public thing”, and its core values, including the Liberte d’expression, a constitutional principle of the French Republic, threatened by the terrorist attacks that took place the same morning.
Je suis Charlie : Standing united to defend the “Res-Publica”. Within a few hours, the Place de la Republique in Paris became a gigantic “agora” welcoming thousands of citizens. “We are unity”, claims one board. Under the federating slogan “Je suis Charlie”, people stand united in pain, shock, and anger.
The growing flow of people quickly forms a large mass taking over the pavements and the roads of the whole area, slowly gravitating towards the centre of the square. Some people climbed up around the light poles or onto the roofs of bus stops, from where they can get a unique view over a united group gathering around the central statue called “The Triumph of the Republic”. All are looking in the direction of the bronze statue of Marianne, symbolising the French national values of Liberty, Egality, Fraternity. The massive crowd appears calm, quiet, in pain, staring at the few people who managed to climb on the monument, waving posters and chanting slogans.
Right of Response. The people that are here tonight are not passive spectators. They are, by their mere physical presence, active citizens defending the core democratic principles. People from all ages, gender and backgrounds braved the cold and the strengthened security measures on this January evening to stand united against violence, share their pain, reflect collectively on the most deadly attack that took place in 50 years in France. The tragedy that took place in the morning is not only a terrible human loss but also a direct attack to the essential value of Liberty of Expression.

A few people wave the French Flag. On one of them, “Je suis Charlie” words stand on the middle of the Tricolour. A few meters from it, a poster reads “Charlie Akbar”. The crowd use words - on posters, slogans, songs and discussions - as their main weapon against those who claimed to have  “Killed Charlie Hebdo” the same morning. People here tonight are defending the liberty of speech and of press by standing united and using the power of words in this cathartic moment. “Ink must flow - not blood”.

Some of the people at Place de la Republique stare at the bronze Marianne as if trying to find guidance (strikingly reminding the “Liberty guiding people” by Eugene Delacroix), while other engage in conversations as attempts to find a meaning, an explanation through reflecting on the tragedy.
Sometimes a louder voice emerges from the crowd, chanting repeated words : “Nous sommes Charlie”, “We are Charlie”. Soon, other voices join, and then hundreds of them. “Liberte - d’expression !”, “Liberte - d’expression !”,  “Liberte - d’expression !”. At one point, someone tries to sing the French national anthem, La Marseillaise. His attempt is immediately shut down by hundreds of booing voices. Democracy wins over nationalism tonight.
Enlightenment. Small candles are held by some people in the crowd, as well as by the Statues of the “Triumph of the Republic” monument, shedding new light on its artistic allegories. Some of the candles are also used to light paper lanterns that poetically fly into the sky.
Suddenly, the crowd holds its breath : one of the sky lanterns dangerously flies towards the central bronze statue, as if the fire was inevitably going to hit Marianne. At the last minute, the flying lantern miraculously manages to avoid the monument, rises above the crown of invincibility and continues its flight into the sky. People laugh, cheer and clap - as if this could only be a positive sign for the future, a premonition that the fight over obscurantism will be successful.  The crowd continues staring at the star-like lanterns for a while - before bringing back their attention to Marianne and her bronze star, a French revolutionary symbol known to represent “intelligence”.

Works by ...
Images By Chris Saunders 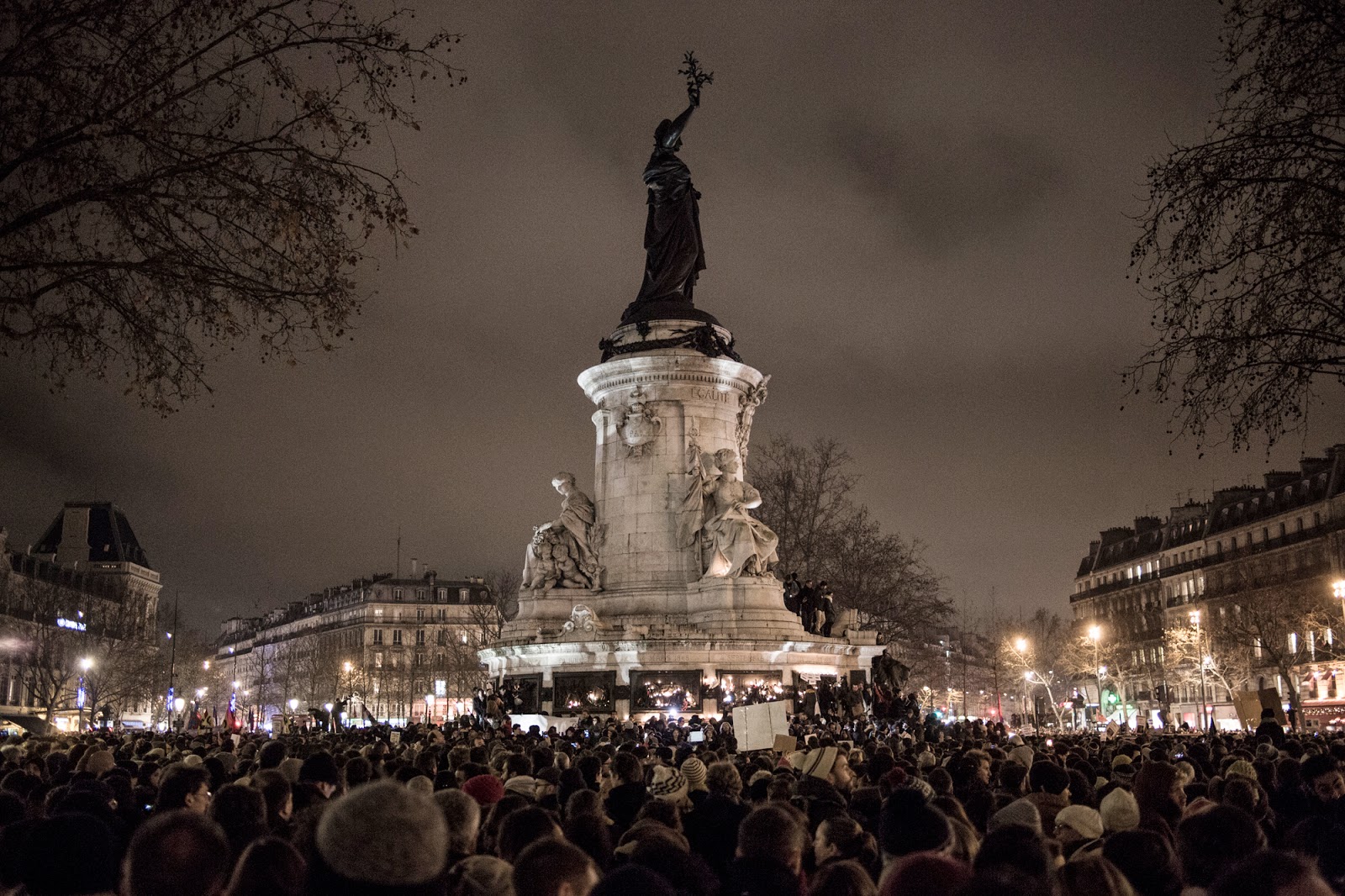 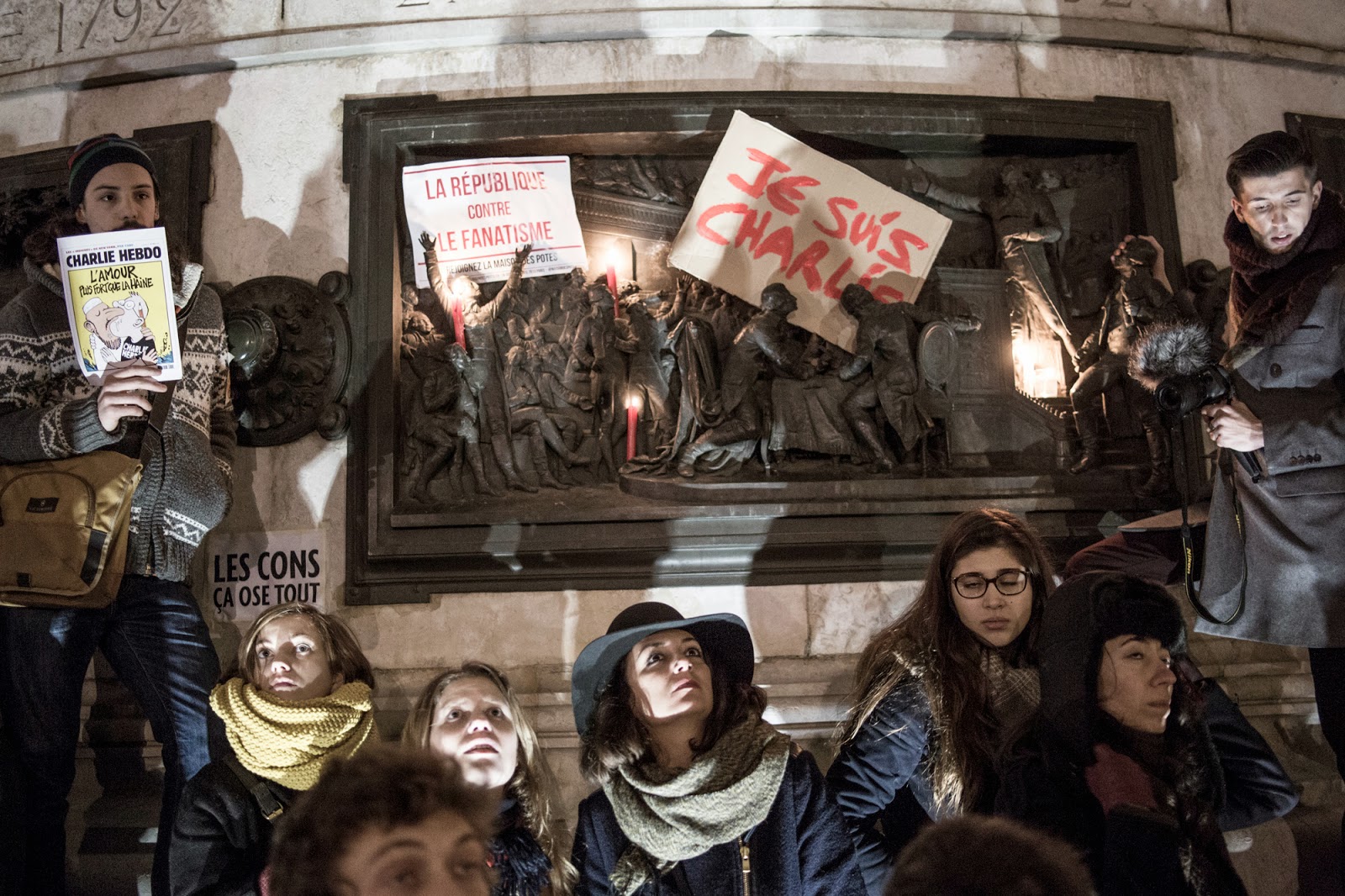 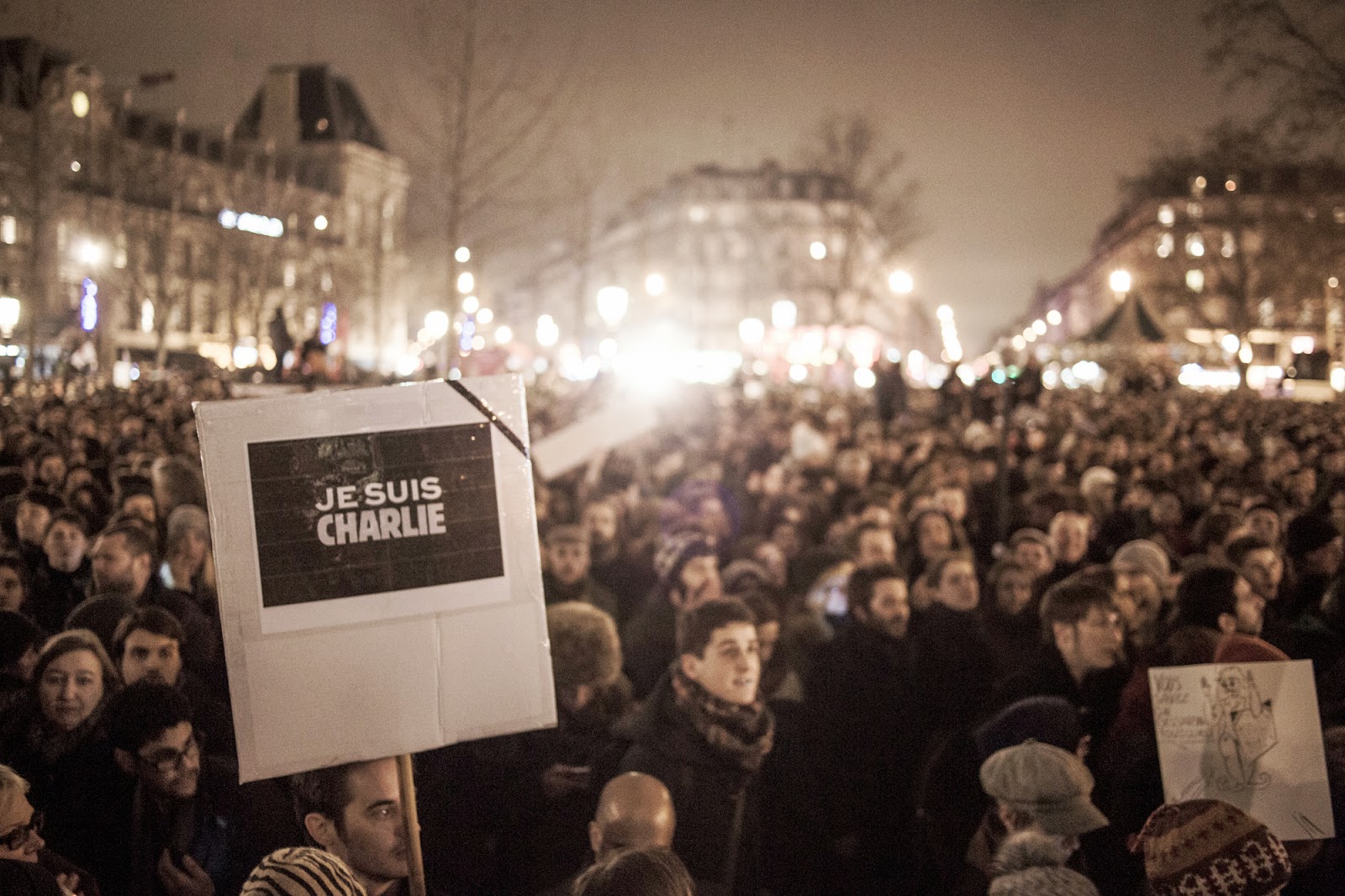 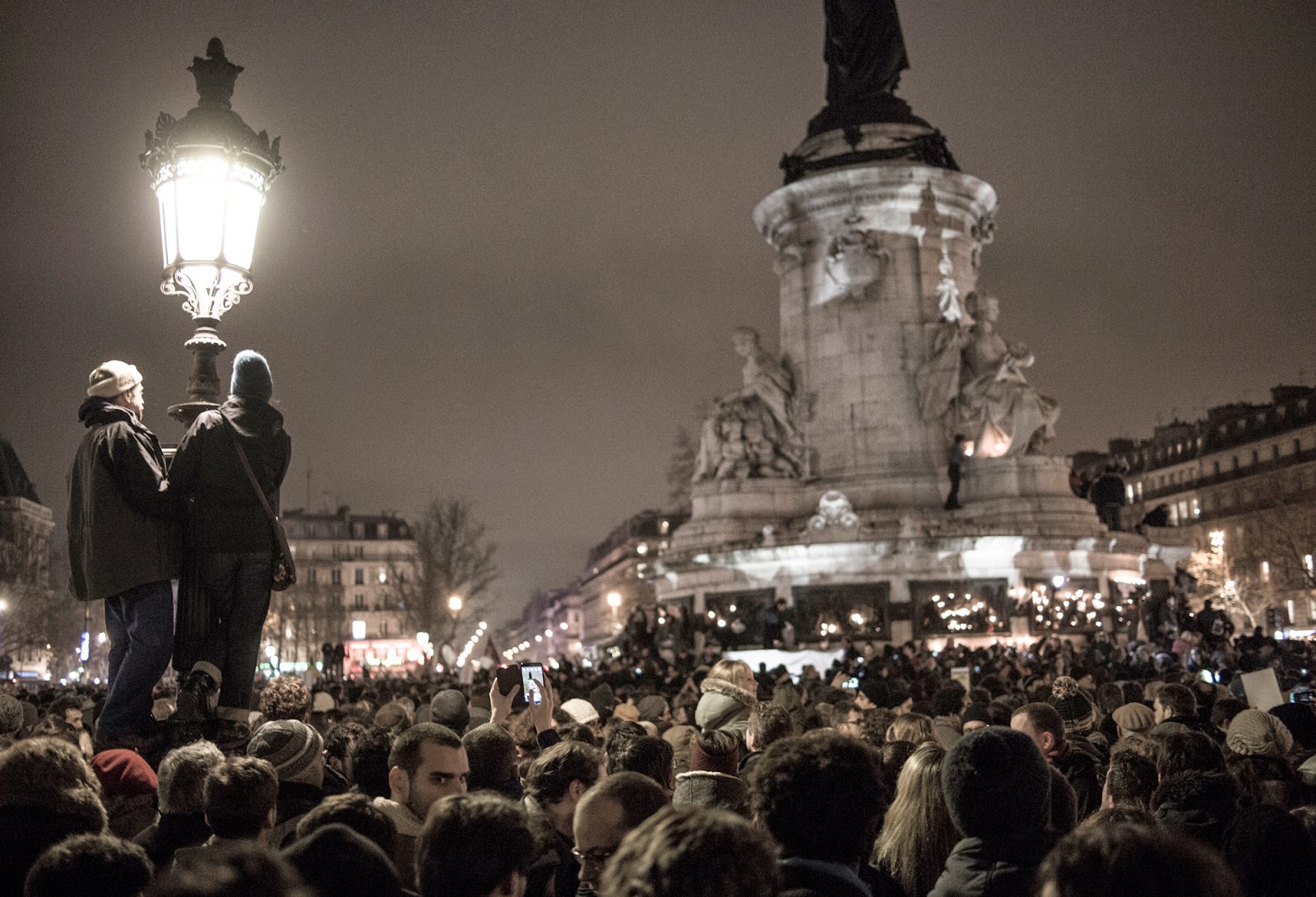 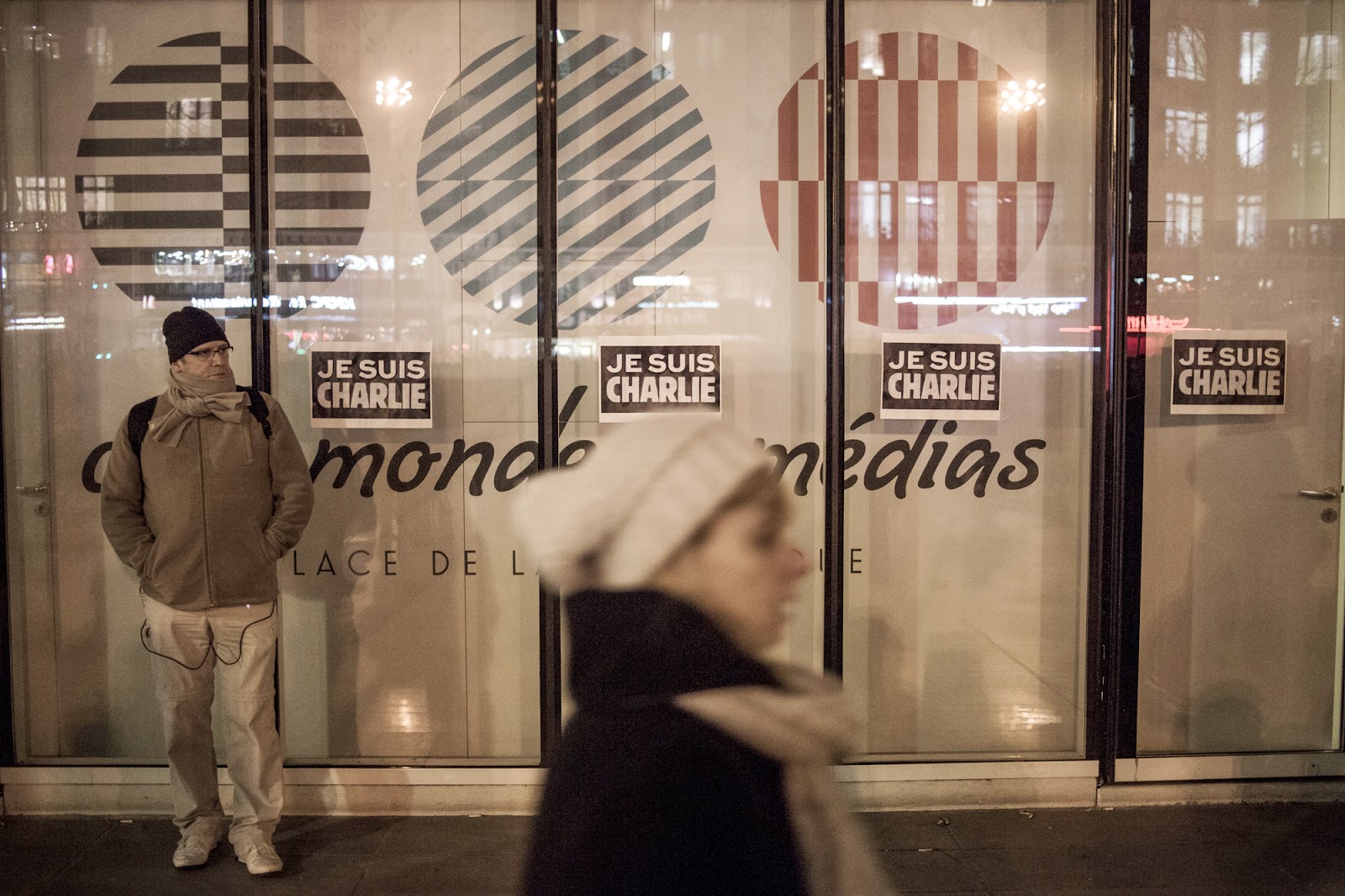 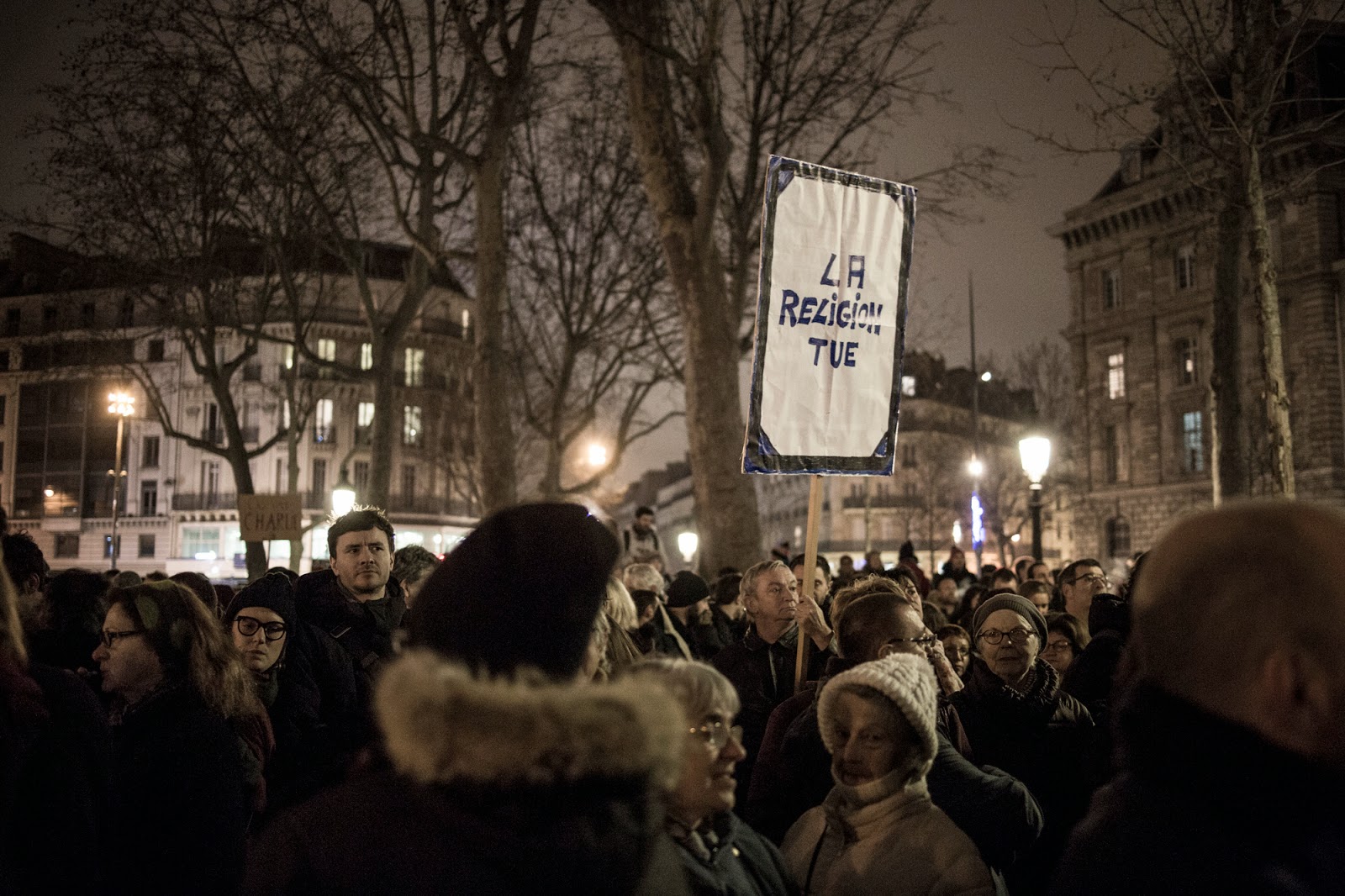 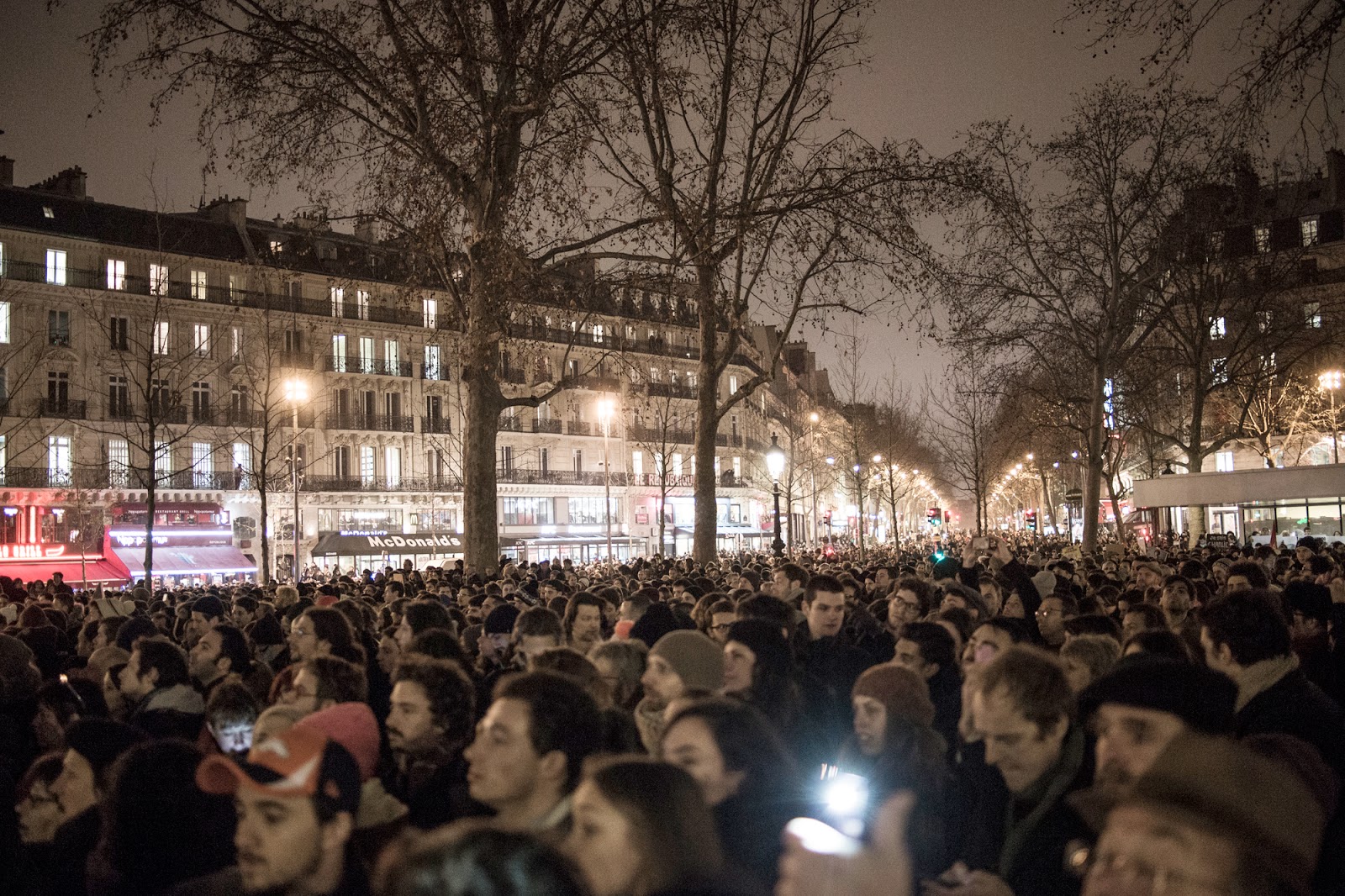 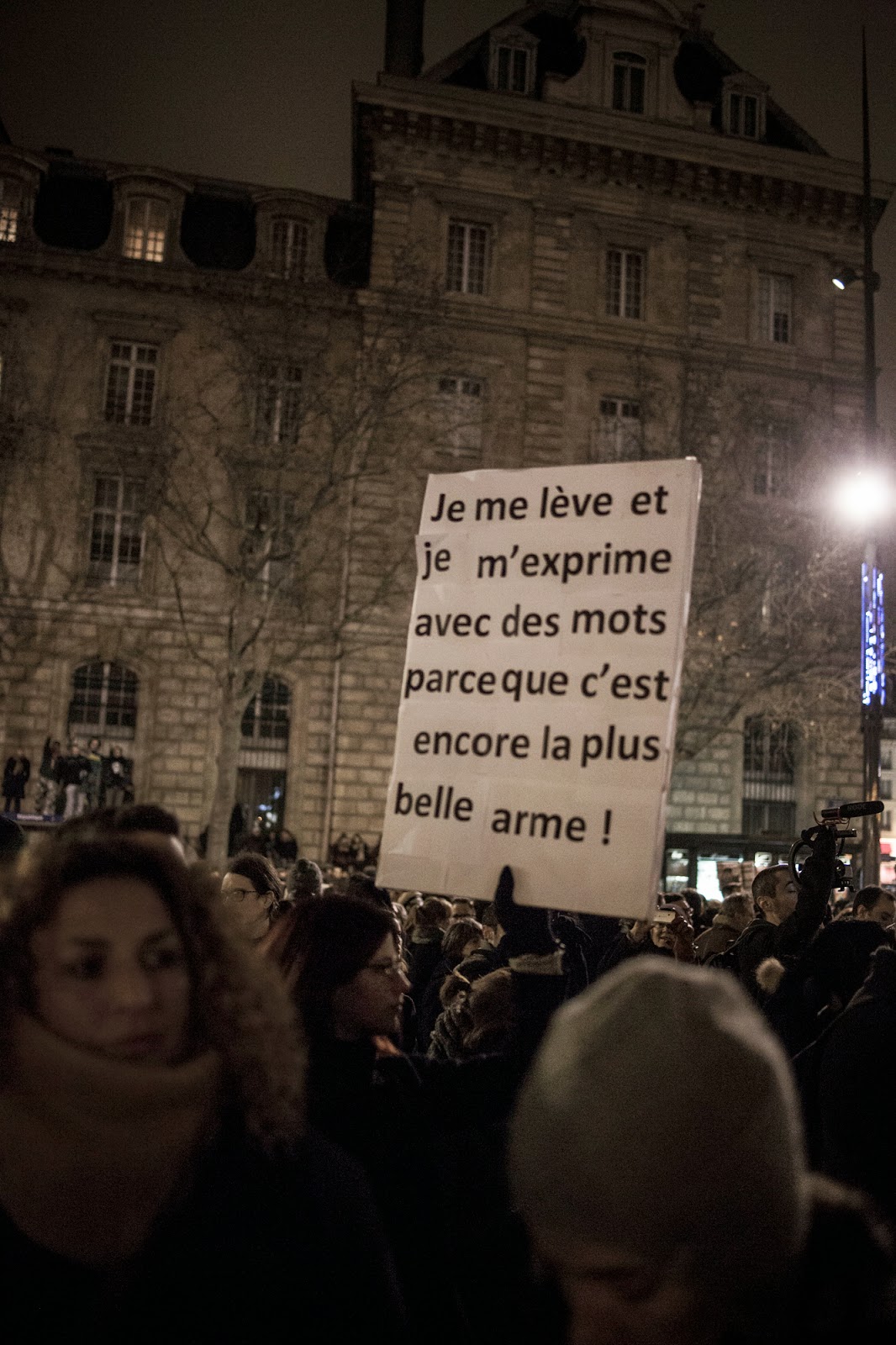 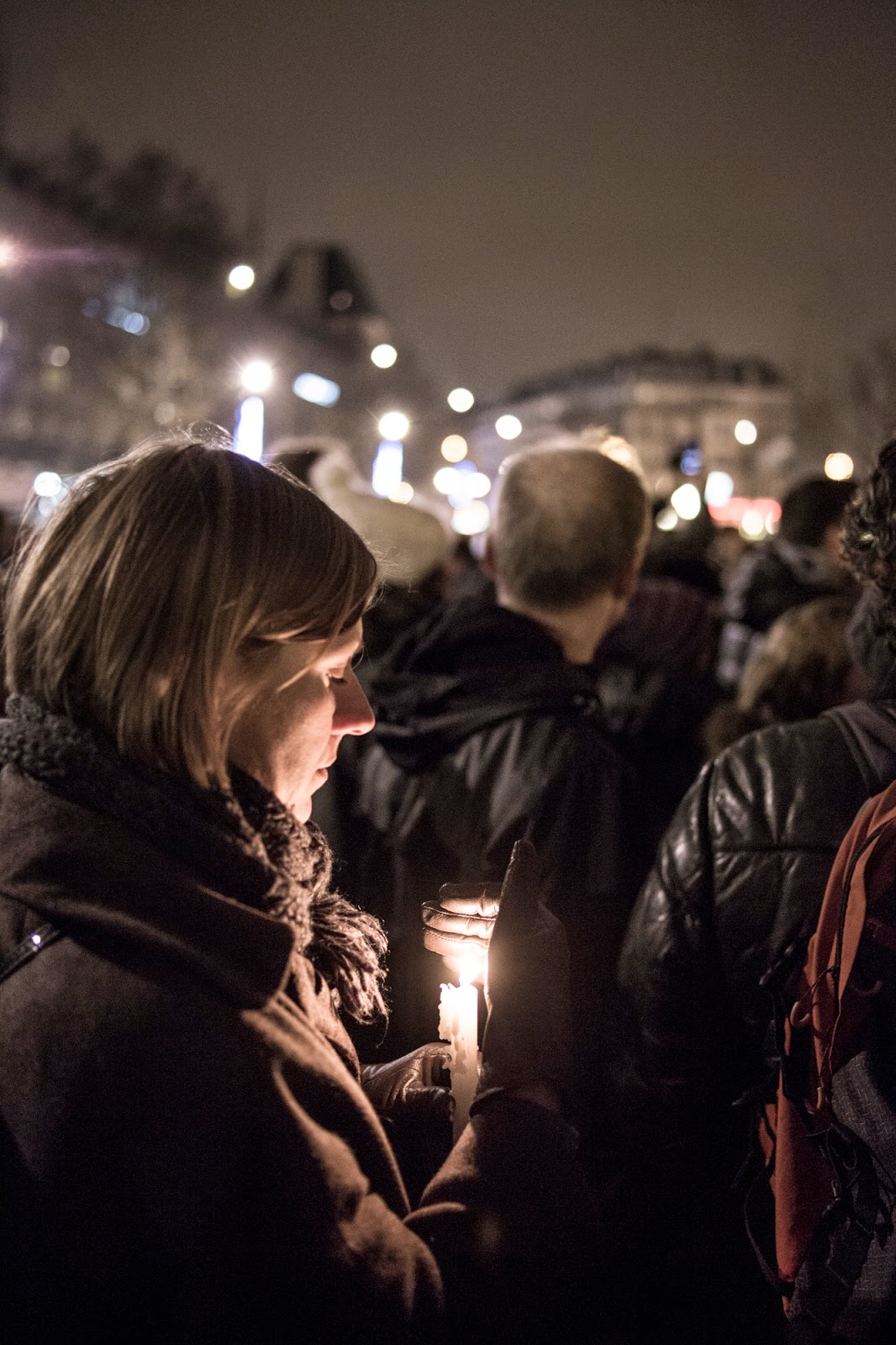 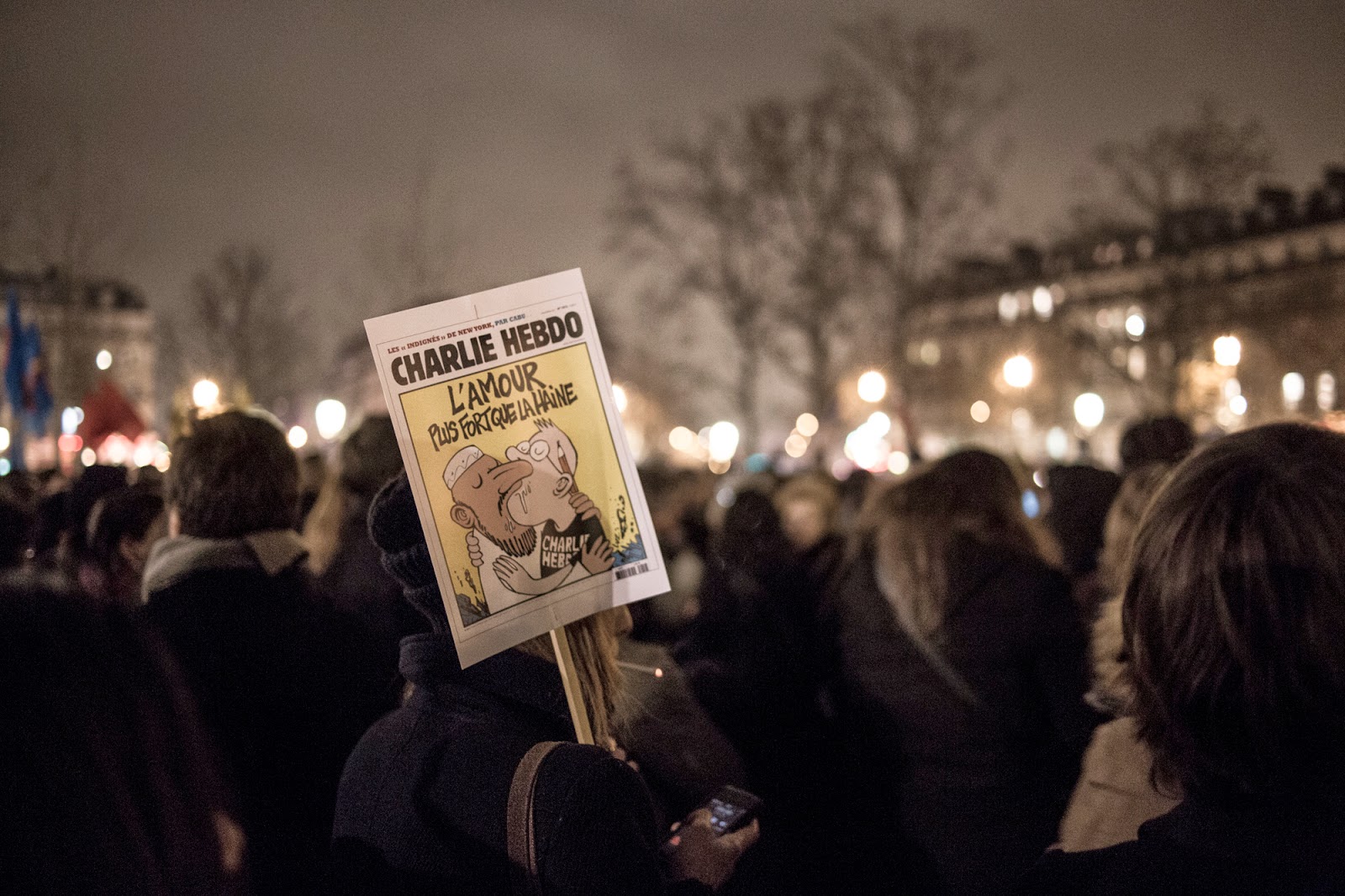 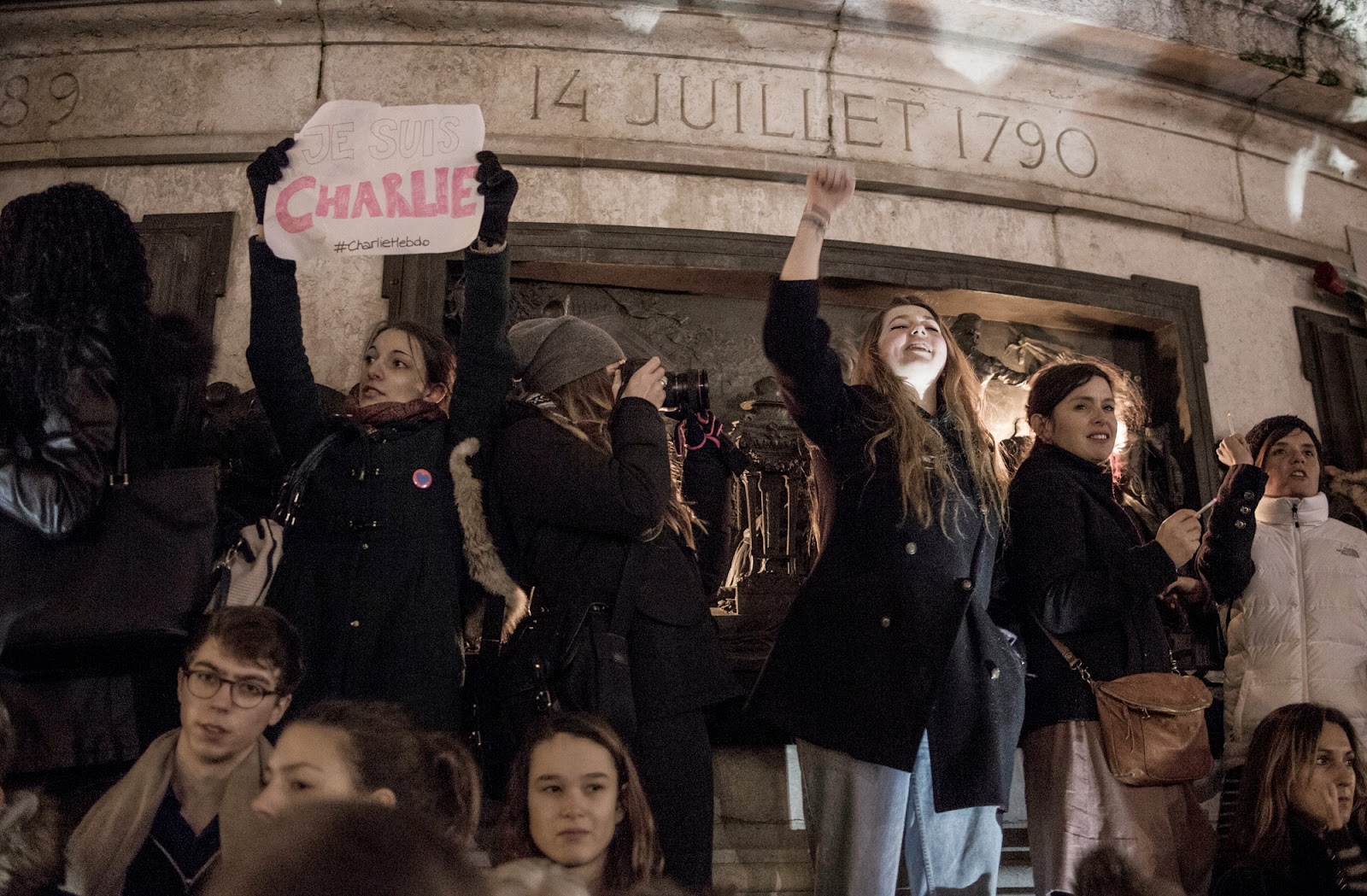 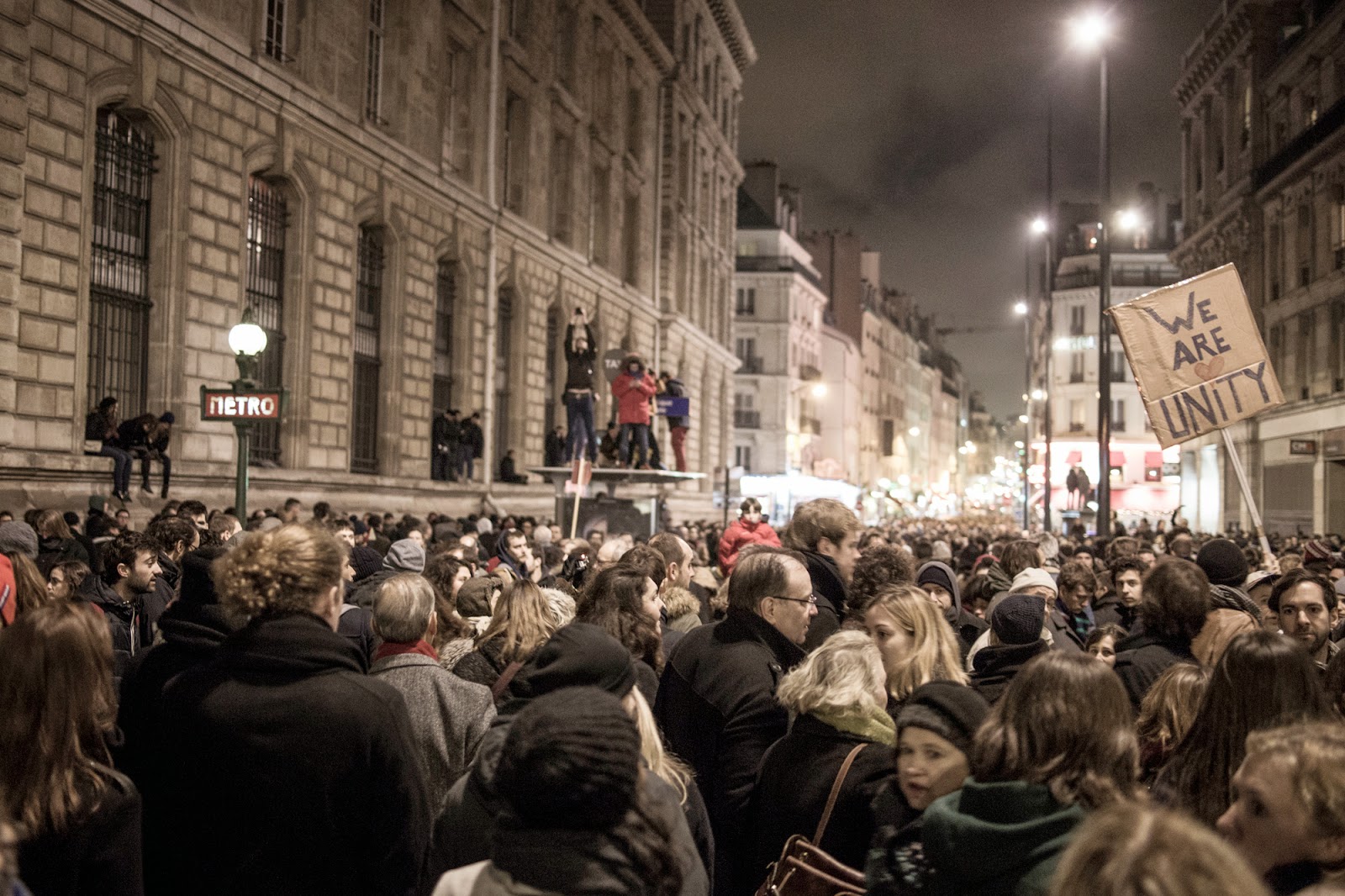