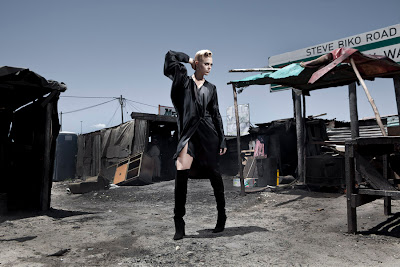 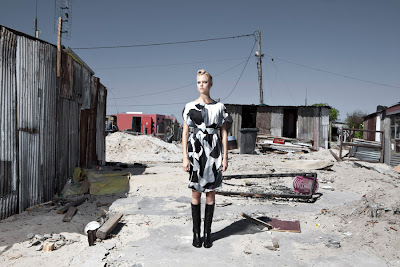 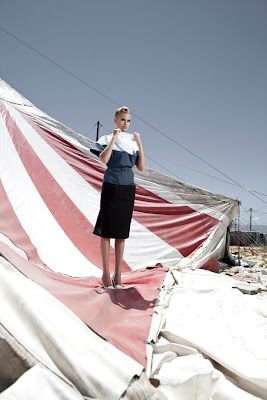 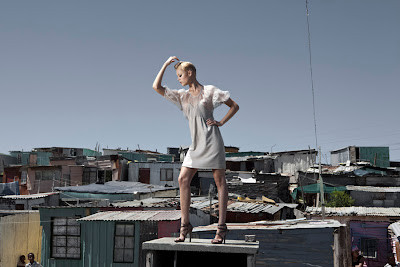 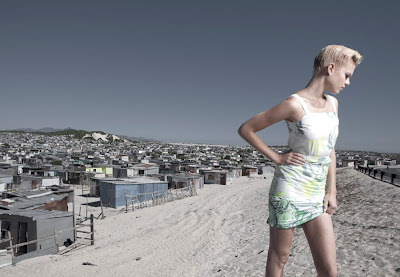 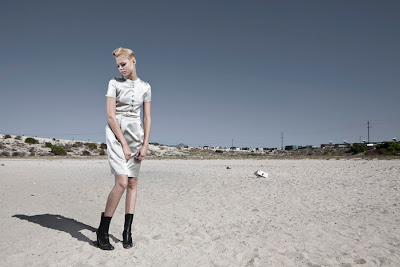 As read on artheat, "Another cool kid white boy hanging in the slums yo." Written by another struggling white 'artist'/critic from Cape Town.

"I don't care what they say about me as long as they spell my name right." P.T. Barnum

Email ThisBlogThis!Share to TwitterShare to FacebookShare to Pinterest
Labels: fashion

HI Chris
You asked for my opinion so I thought I'd give it to you. Its pretty long and involved but hopefully it makes sense. I think you have started something really great, but here are some more of my thoughts:

firstly, your attempt to show a township in a more 'positive' and accessible light (as you said townships are often portrayed negatively) falls down for the simple reason that you do not feature any of the people from the township. There is no engagement with the humanity of the township, which is arguably the most beautiful aspect of a place like that.

The reason I say that the most beautiful aspect of a poverty stricken area is the people is because the actual decay of the area itself cannot be objectively described as beautiful. It is beautiful to you, the photographer, and your viewers, because of your cultural background. It is beautiful because you are versed in specific aesthetic, and the fact that you can see beauty in decay says more about your privileged position in society than the objective beauty of decay itself. Human experience, on the other hand, is universally accessible. Who can deny the objective beauty of a smile, for example?

I appreciate that you reconginse the fact that the township is alien to you, but here is why I think your interpretation of it could be harmful or offensive:

While I would agree that there are often many misconceptions about township areas and their people, the main conceit that they are dirty, poor, dangerous places is not misplaced. They are. And framing them as you have, in a way that you as an educated, artistic white person, find appealng, does not make this reality any less real.

You say you want to curb the tide of fear about townships as perpetrated by the media by juxtaposing fantasy with reality and breaking down boundaries.
But do you not see how placing the fantasy of a white women into a township only strengthens the idea of the township as an alien place?

A beautiful, european, white woman is one of the most dominant representations you see in the western media today. In fact I would say it is probably the most dominant ideal of human beauty throughout the world. Therefore, the white woman is not the alien in the image - she is the norm that we will recognise and identify with. The township is the alien element, just as it is in our day to day lives. Therefore in our minds it stays dirty, dangerous and remote. Your only hope to break down the barriers - the people themselves - are absent. And so how are you going to break down the fear that privileged people have of khayalitsha? We are not afraid of the place. We are afraid of the people.

If your motivation was to simply convey they beauty of decay to your viewers, I would say that you have succeeded admirably. The photos are wonderful and visually compelling. But the use of the white model, the lack of local residents and the use of poverty as an aesthetic backdrop smacks of insensitive cultural tourism and a total lack of sensitivity to your own class privilege. This is the inherent problem of your approach.

I hope this illustrates the answer to your question "Why is it un pc to take a beautiful European white girl dressed in beautiful European clothing into an area which is culturally unique, with its normally negatively presented landscape in a more beautiful and positive manner"?

I am personally more compelled by your statements that people who live in townships live a 'regular existence'. They do. Maybe it is this regular existence that you should focus on next time. The need in this instance is to connect middle class people with township people through shared experience. We are all humans. We all try to live with dignity and normalcy. But I saw no dignity and no normalcy in your pictures. I saw no people. I saw only a white woman, something I see every day, and a decaying township used as a pretty prop.

If you would really like to help develop the area into a place where media production happens, you will break down the boundaries between the people. The more normal township life seems to middle class people (while not denying harsh truths), the more township people will have a voice that can access the mainstream media. Hopefully, one day, that will mean that production occurring in townships and similar areas will focus on the residents themselves, and not just the pretty aesthetic. That to me will be infinitely more empowering and unifying than using a marginalised society to prop up a dominant one.

I think you have started to explore some very layered, very difficult ideas. Please carry on. It is so important to engage with these issues and your bravery in going into a place that is alien to you is admirable. But push it further, engage more. I think it will be rewarding for everyone involved.

Mia, one of the most important things when making commentry for is to also give a face to the commentator. Its part of my visual way doing everything. I have never been much for words but I have attempted with this last post. This goes against many ideals which I have on my work. I dont like to break down my thought process when taking images and having ideas into a form which over literate people can look into further than of their own oppinions and emotional replies to my image.

By breaking down my work into the form of something written and not visual makes me feel that I have betrayed my own philosophy on life. Been an artist gives me the power to portray something without giving my own and reasoning for the reason I do things that I do.

Now people can quote me in manners that only a person who has tons of knowledge and lacks the wisdom to get my oppinion only from the visuals first is someone I would to talk to more and try get to learn something from. Because often I have the wisdom and passion in my work but lack technical backing for my reasoning.

Thank you for you comment and the amount of effort you put in to it.

I would like to say that if you saw the original blog update with the model with the kids was me trying to show the experience and give it a face before just showing the fashion and fantasy elements. People where highly offended by this update so I decided to put up the final shoot quicker than originally planned with my reasoning which is more of a draft and brief positive statement. If I would have to put out my entire opinion it would take hours of debate and a very sore throat the next day. But I am up for this and it would be lovely to discuss the subject at hand.

Hope you get to read this.

You should probably read this:
http://artheat.net/index.php

I agree with Mia, and think that, however ambivalent your intentions are you need a serious wake up call about this sort of imagery!

See what the artworld has to say.

i do not feel this shoot works, chris.