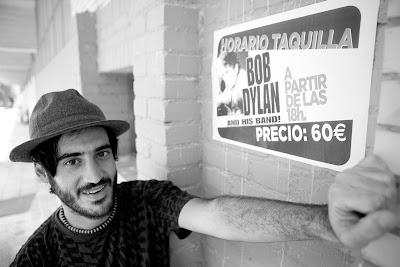 Its been since Barcelona that I've put out a Blog update. Daniel and I traveled up to Pamplona after Sonar, to the city where the famous running of bulls event occurs every year. Unfortunately we where a week out for the event and wouldn't have time for it. What we did make it for though was to Bob Dylan in concert, one of the most incredible experiences of my life. We heard rumors at the gig that this was his last European tour. It was an emotional time for many and I felt privileged to watch one of the worlds most amazing singer/songwriters/poets this world has ever seen.

Below is video clip I shot at the venue on my cellphone and an image of Daniel outside the venue is above.